Filed Under: The World Economy

“Unless we look more creatively about how we engage everyone in physical activity, we may win medals but we will be bottom of the league table on health and wellbeing” – Paralympian Baroness Tanni Grey-Thompson

“Britain really has got sport upside down. Why spend billions on an Olympics when few kids in the country have the facilities to play judo, fencing, or equestrianism anywhere near their homes?” – Simon Kuper, co-author of Soccernomics and FT columnist

On 27 February I went to a fascinating debate, “Has Britain Got Sport Upside Down?”, hosted by Pro Bono Economics, (a charity established in 2009 by Bank of England Chief Economist Andy Haldane and Tomorrow’s People CEO Martin Brookes) at the Royal Institution, sponsored by Nomura and Weil. The 2012 London Olympics was a tremendous success for the UK, in terms of its performance both in hosting the Games successfully and in the events themselves. The 2016 Rio Olympics saw a record haul of 130 medals, with heroes such as Adam Peaty restoring national pride and apparently inspiring a nation to take up sport themselves.  So, it seems a no brainer for UK Sport to invest £345m to win more medals – to take us on “the journey to the Tokyo 2020 Olympics and beyond”.

Not so fast. This debate provided a range of viewpoints – from Simon, Tanni, Mark Gregory (EY UK & Ireland Chief Economist who has quantified the economic and social impact of sport), and Will Watt (founder of Jump and an expert in policy evaluation) – on whether UK Sport should instead invest its limited funds on grass-roots sport. I attempt to summarise the main points here; these views are the panellists’, rather than my own, and not shared by every panelist. To inform the debate, YouGov conducted a survey, which provides some of the data here.

Does the Olympics Inspire Participation?

Kids have posters of their sporting heroes on their walls, and dream of becoming the next Wayne Rooney or Andy Murray. Olympic stories are arguably even more inspiring, with many of them having to juggle training with a job or studies. So, it seems obvious that Olympic success should inspire Britons to take up sport.

But, only 7% of respondents were “inspired to take up a particular sport as a result of any Olympic games” (emphasis added). Of those who said no, the reasons were the following:

65% of respondents cited the cost, busyness, no close facilities, low-quality facilities, or low confidence. So, perhaps a better strategy would be to invest in making participation opportunities high-quality, affordable, accessible, and non-intimidating? Indeed, only 4% of respondents argued that “gold medal wins in Tokyo 2020” should be the UK’s main priority, with most respondents suggesting that funding should benefit the general public: 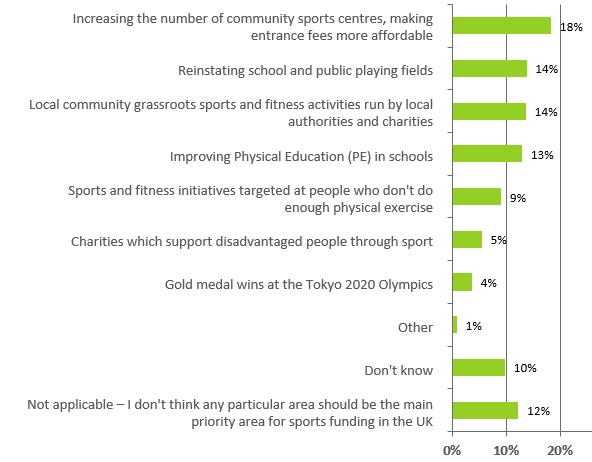 So, the public would rather us divert our limited funds to investing in grass-roots sport, rather than chasing gold medals. Uncannily, this echoes Prime Minister May’s industrial strategy to make business work for “all, not just the privileged few” and calls to focus on the “99%” rather than the “1%”. Gold medals can inspire, but without the opportunity to participate, even the inspired may not take up sport – which may be why only 7% actually do so.

The Problem and the Opportunity

The panelists provided some fascinating anecdotes, arguments, and statistics to highlight the crisis in UK grass roots sport, and the potentially substantial returns from investing in it. (Note: the statistics come from the panelists, not me):

(This section contains my own views).

What can economic principles teach us about the optimal funding strategy? They highlight the problems with non-linear schemes, where there’s a sudden jump above a particular threshold. For example, a CEO incentive scheme that pays out if earnings per share exceed £1 provides little incentive to increase earnings from 50p to 99p, but large incentives to increase earnings from 99p to £1, even though the former is a bigger improvement.

Similarly, a strategy to maximise Olympic medals provides little return to Team GB finishing 4th in a sport in which they never even qualified for the finals previously, but a substantial return to converting 4th place finishes into a medal. While there’s clearly some direct benefit of medals (national pride and inspiration), most of the benefit is indirect. Olympic finishes are a by-product of general investment in sport, rather than the goal in itself. When there is active grass-roots sport, this feeds through into developing future Olympians – just like purposeful companies do not chase profit directly, but become profitable as a by-product of being purposeful. So, moving from non-finalists to a 4th place position would likely be an outcome of significant increases in general participation – with substantial social benefit – but not be rewarded in medal tables. And, the law of diminishing returns suggests that the investment required to move up from 4th to 3rd is likely substantial, compared to moving up from 10th to 4th.

Back to CEOs, an earnings per share target may cause CEOs to ignore other dimensions – e.g. cut R&D to boost earnings. Similarly, a strategy to maximise the number of medals may cause sporting authorities to ignore certain sports simply because the UK has little chance of winning a medal – including mass participation sports such as basketball, which require very little equipment to play. If the ultimate goal is mass participation (and Olympic inspiration is one of many ways to achieve this), shouldn’t the UK invest more in basketball rather than rowing (where participation require a nearby river, the ability to pay for expensive boats, and a job/lifestyle that allows early-morning training)? (Note: I’m terrible at basketball, but have rowed ever since university and love the sport, so any personal bias should be to the latter).

The idea of redirecting funding to grassroots sport and away from Olympic medals was not shared by all panellists. Some emphasise the substantial pride that results from Olympic success. This spills over into the inspiration to take up far more than just sport. For example, the stories of how a gold medallist worked hard training in their sport may inspire people to work hard and train in a non-sporting context. Separately, in a 2016 marked by a divisive Brexit campaign, the success in Rio helped unite the country again.

Thus, many panelists argued that it should not be an “either-or” strategy. We should invest in the Olympics to generate the inspiration, but also in grass roots to allow the public to act on this inspiration. A skeptical panelist said “nice idea in theory, but in practice, there’s not the money to fund both.” But, we can think of innovative funding strategies. For example, Premier League footballers pay £891m in income tax. We could earmark a small percentage of that to invest in grass-roots football.

Perhaps one of the best ways to invest is to help the many volunteers who help encourage sports participation for free. For example, Happy Bootcamps runs bootcamps all across the UK, and in 7 other countries, which provide free high-intensity interval training sessions (that fitness companies would charge £15-30 for). All coaches in all locations (including the founder, a former professional rugby player whose goal is to get 1m people active within 5 years) work for free, yet there are barriers to even voluntary activity. For example, to run a session in London’s Royal Parks requires buying a permit, and developing a website to advertise these sessions is also costly. Giving these permits for free, or the government supporting (either financially, or through its own advertising) voluntary activities could potentially give a substantial return for little investment.