Why the MSCI Study Does NOT Show That Equity Incentives Backfire

MSCI have released an impactful study entitled “Are CEOs Paid for Performance? Evaluating the Effectiveness of Equity Incentives”, purporting to show that equity incentives lead to poor long-term performance. In simple language, they just don’t work. This study has been highly influential and seized upon by the Wall Street Journal, CNN, and Fortune as “smoking gun” evidence that incentives backfire. It’s also central to UK MP Chris Philp’s proposal for pay reform that was recently presented in Parliament.

I applaud MSCI for taking an evidence-based approach to CEO pay. Rather than proposing reform, they first start by looking at the evidence. In addition, the paper (in many parts) is written objectively and modestly, just describing the results without making any policy proposals; it is others who have since over-extrapolated from it. However, it does not actually show what it purports to show. Given the importance of CEO pay to society, and given the impact that this report has had on leading thinking, I thought it would be useful to clarify what they actually find.

The “punchline” graph, quoted in Philps’ report, is given below, which shows a (weakly) negative link between CEO pay and long-term shareholder returns: 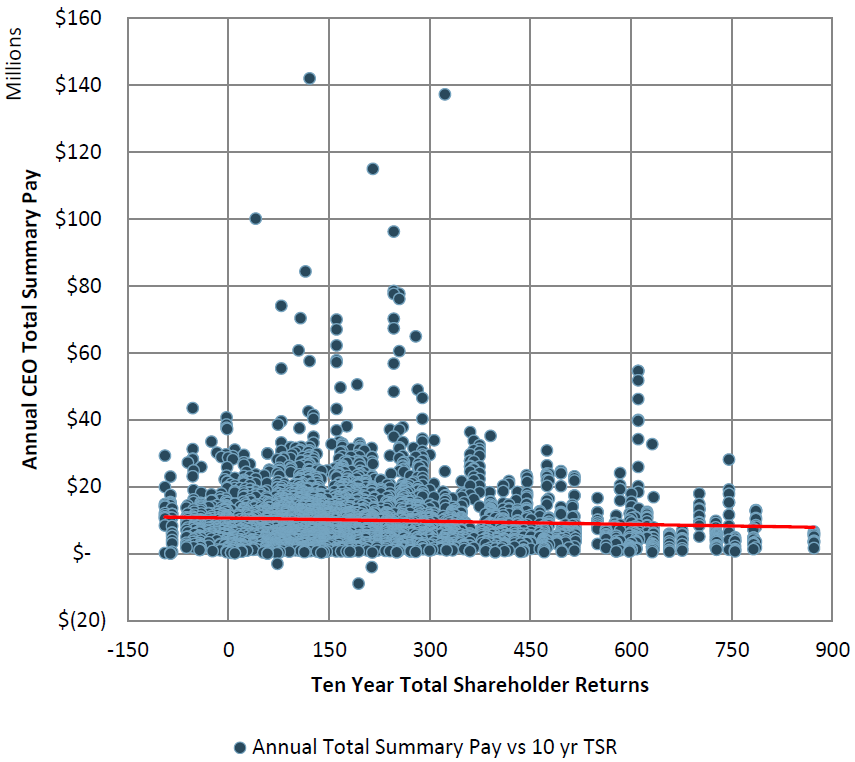 The authors argue that it shows that “Companies that awarded their CEOs higher equity incentives had below-median returns”. This conclusion is unwarranted, for the following reasons:

As can be seen in the above graph, the y-axis is “Total Summary Pay”. This includes newly-granted stock and options, but also many other components, such as salaries and bonuses. Thus, it is very inaccurate to describe the results as being about “equity incentives”. Equity incentives are certainly one component of pay, but there are many other components as well. Higher summary pay does not mean higher equity incentives. Similarly, you would never say that, because “Total Shareholder Return” (TSR) was low, dividends must be low. Dividends are an important element of TSR, but not the only element (capital gains are also important).

Total Summary Pay does include newly-granted stock and options. But, as I wrote previously in “Eight Common Myths About CEO Pay“, the vast majority of a CEO’s incentives come from previously-granted stock and options. As shown by Jensen and Murphy (1990),  the most-cited study on CEO incentives in history, incentives from previously-granted equity are several orders of magnitude higher than new equity grants. (As a simple example, Steve Jobs was famously paid $1 a year at Apple, and so no new equity in some years. Does this mean he didn’t care about performance?  Clearly not, because he had hundreds of millions of previously-granted equity.)

Willis Towers Watson, the leading compensation consultant, give a separate critique of the MSCI incentive measure in their article “The media and the MSCI study: A textbook case of missing the boat?”

The headline result, in the above graph, does not control for firm size. This is a serious omission since it is well-known that small firms pay less, and small stocks typically outperform. (See my earlier post, “Size Matters, If You Control Your Junk“). They do control in a robustness test, but this should be in their main specification.

Moreover, even the robustness test omits obvious controls, such as risk. It’s well established that riskier firms pay more, and also deliver lower stock returns, which could be driving the results.

Even if there were a strong negative link between CEO pay (or incentives) and future stock returns, they do not show a causal relationship. To be fair, MSCI don’t make causal inferences, but media outlets do, e.g. the Wall Street Journal state the MSCI study asks if “high CEO pay helps drive better results”. It could be that future stock returns cause current pay. A firm that has bleak future prospects will have to pay a CEO more to attract her in the first place.

So, what does a correctly-done study show? As I wrote in “Higher Stock Returns When CEOs Own More Shares“, von Lilienfeld-Toal and Ruenzi show in an excellent Journal of Finance paper that firms with higher CEO stock ownership – considering all ownership, not just newly-granted shares – outperform low-ownership firms by 4-10% per year over the long-run.

Is this study also subject to the correlation/causation critique? Perhaps CEOs who know that their firm will do well in the future will be more willing to accept stock (rather than cash) in the first place. So, to suggest that the effect is causal – high equity causes the CEO to take better decisions – the authors show that the effect is stronger in settings in which the CEO has greater discretion. These are firms in which:

Pay certainly should be reformed. I have argued for such reform vigorously in the Wall Street Journal and World Economic Forum.  But, just like a doctor needs to make an accurate diagnosis before prescribing the remedy, before proposing any reform, we need to start with the facts – what are the areas in most serious need of remedy, and what are the ones that are working well? This is the role of academic research. To be published in the Journal of Finance, von Lilienfeld-Toal and Ruenzi had to present their paper at many academic conferences and seminars, and undergo stringent peer review. While peer review is far from perfect, this reduces the risk that incentives are mismeasured, or the study makes claims that it does not actually show. The above link shows that their paper was first posted in 2009 and took 5 years to be published, while they refined it to ensure the findings are solid.

MSCI should absolutely be credited for their evidence-based approach, and I again reiterate that many of the causal claims are made by the media, rather than them. However, one statement does cause concern: they write that “While we have not completed a full statistical evaluation of this relationship, we believe the findings are sufficiently compelling to serve as a basis for further review and discussion regarding this widely debated aspect of corporate governance.”

Thus, even they recognize that their findings are half-baked. But, you would never report the results of a medical study (e.g. a clinical trial on a drug), until it was complete. Doing so would be completely irresponsible. Unfortunately, it is also irresponsible in an economic context, where it may lead to laws being passed or decisions being taken based on inaccurate evidence (see the recent Brexit referendum). While academic studies are released in “working paper” form, before eventual publication, this is typically after presenting it and sending to peers first – the authors have taken it as far as they can and are now soliciting outside suggestions. Here, the authors know that they have not taken it as far as they can and the evidence is incomplete, yet MSCI has been taking out full-page adverts in newspapers and magazines parading this study. CEO pay is such an important for society that we must ensure that any evidence we use to suggest policy reform is solid, rather than half-baked.