Simplicity, Transparency, and Sustainability: A New Model For CEO Pay

How did BP CEO Bob Dudley get paid £14m in 2015, despite the stock price falling by over 15%? Because of a complex, opaque pay scheme known as a Long-Term Incentive Plan (“LTIP”).

A LTIP pays the executive according to multiple performance measures – for example, stock price, profitability, and sales growth – at the end of an evaluation period (say 3 years). For each measure, there’s a lower threshold (say a stock price of £4) that the executive must beat for the LTIP to pay off. The value of the LTIP rises with further increases above £4, before maxing out at a higher threshold (say £8). 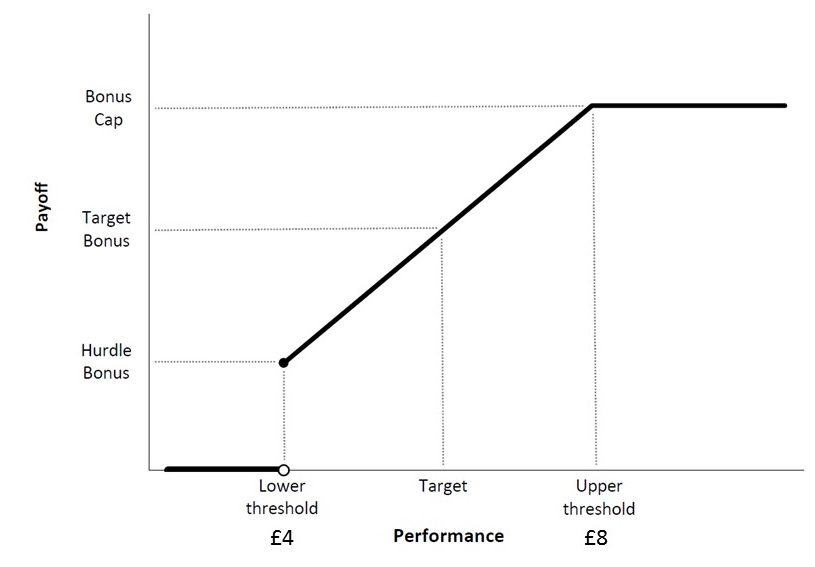 The philosophy behind LTIPs is sound – to link pay to performance. But, it does so in a needlessly complicated way, that allows for gaming and fudging.

Let’s start with gaming. Despite the name, evidence shows that “long-term” incentive plans lead to short-termism as the end of the evaluation period approaches. If the stock price is just below £4, the CEO may cut R&D, to boost earnings and get the short-term stock price over the hurdle. The CEO might also gamble. If the gamble fails, the stock price falls to £3, but the LTIP wouldn’t have paid off anyway, so the downside is limited. If the gamble succeeds, the stock price rises to £5, and the CEO cashes in. Effectively, the LTIP gives a one-way bet. And the problems aren’t limited to the bottom end. If the stock price is just above £8, there is no further upside. Rather than innovating, the executive may coast and be excessively conservative.

Turning to fudging, there is a huge amount of ambiguity on how to design the LTIP:

What’s the solution? Cut LTIPs and other bonuses, and move towards paying the CEO in cash and shares (with a long holding period). This satisfies three principles:

A very important advantage of shares is that they can be given to all employees as well. This will help address fairness concerns. If the firm succeeds, why should only executives benefit? Employees contributed to the firm’s success as well. If they are given shares, they will benefit too. CEOs can’t gain without employees gaining also. But, if CEOs get LTIPs and workers get shares, the LTIP might pay off even if the stock price falls, leading to concerns of “one rule for them, another rule for us”. Indeed, evidence shows that broad-based equity plans improve performance, perhaps due to a team mentality.

Giving shares to all employees will allow them all to – quite literally – share in the firm’s success that they all helped create.

Q1: Is this just a hypothetical idea? Will it be implemented in practice?
A1: The idea of de-emphasising LTIPs and increasing long-vesting equity was also:

Q2: Won’t this lead to CEOs focusing entirely on shareholders and ignoring other stakeholders?
A2: No. There’s indeed a trade-off between shareholders and stakeholders in the short-term, but not the long-term. CEOs can cut wages to increase shareholder value at the expense of workers, but in the long-term this erodes shareholder value, as workers leave.  See the “Sustainability” point above, and p26-33 of The Purposeful Company Interim Report for a summary of the evidence that purposeful behaviour – serving customers, employees, the environment, and society – boosts the long-term stock price.

Q3: Doesn’t even the long-term stock price depend on factors outside the CEO’s control, e.g. stock market upswings, leading to “windfalls”?
A3: This is true. But, if the CEO is given a straight cash salary (as some advocate), she will likely invest most of it in the stock market (indeed, as the government encourages the public to do). It’s much better if she invests it in her own firm, whose value is mostly (although not entirely) under her control, than other firms, whose value is almost entirely out of her control. Stakeholder trust is improved if the executive is invested, quite literally, in her firm’s success. Note that the CEO would also suffer losses from stock market downturns outside her control, sharing the losses alongside ordinary people who have invested for retirement.

Q4: Shouldn’t we use non-financial measures of performance (e.g. employee satisfaction) rather than a purely financial one?
A4: Any measure of performance will be incomplete and lead to the CEO ignoring factors not captured in the measure – just as teachers evaluated according to students’ test scores will “teach to the test” and not focus on instilling a love of learning. See the concerns under “Turning to fudging” above. The stock price is not a “purely financial” measure, as it is affected by very many non-financial dimensions (see A2 above).

Q5: Won’t this just lead to greed? CEOs just work hard only because it makes them rich – shouldn’t you want a CEO to be intrinsically motivated?
A5: We absolutely don’t want CEOs who work just to make themselves money. We want CEOs who are intrinsically passionate about making products that transform customers’ lives for the better, that provide employees with a healthy and enriching place to work, and preserve the environment for future generations. Profits are a by-product of purposeful behaviour, not the end goal. As stated in my TEDx talk, The Social Responsibility of Business, this long-term congruence gives “managers the freedom to simply engage in responsible behaviour, without a calculation, without expecting anything in return. To do things for intrinsic, not instrumental value. Because even though financial rewards are not the motivation for responsibility, they typically follow anyway.”

As a thought experiment, if your future longevity and long-term health were not affected by how much you exercised, ate, drank, and smoked today, would your behaviour change?

Q7: Doesn’t the removal of performance thresholds make pay even less sensitive to performance? Even if the CEO fails, she still keeps her shares.
A7: While the number of CEO shares doesn’t depend on performance, their value does, and this dependence can be substantial (see A5). Creating an extra sudden drop if the CEO misses a threshold simply gives short-term incentives to hit the threshold. Moreover, since there is less risk of forfeiture, the CEO should be willing to accept fewer shares.

Q8: Isn’t there evidence that CEOs excessively discount future payouts, so a long-term incentive has little effect?
A8: This “evidence” is principally interviews of CEOs, where they claim they would discount future payouts. It’s not surprising they would say this, as some would prefer short-term rewards. The actual evidence is that long-term incentives have a positive causal effect on future profitability, innovation, and CSR.

The above argument confuses the value attached by the CEO to these payouts with their incentive effect. I agree that an undiversified CEO may value £1m of stock, with a 5-year vesting period, at less than £1m, and so she migh onlly be willing to give up £900,000 of guaranteed salary to receive this £1m. Similar to the cost of a risk management system, this £100,000 difference is worth paying to ensure correct decisions. Average FTSE 100 firm size is £8bn, so if short-term incentives cause myopic actions that reduce firm value by 5%, this is worth £400m.

However, this does not mean the incentive effect falls. Assume that, by taking long-term actions, the CEO adds 5% to the 5-year equity return. The “baseline” value of the equity could be +20% or -20% due to factors outside her control – equity is indeed risky. But, long-term actions increase the future value of equity by 5%, regardless of market conditions. If there is a downturn, long-term actions boost the stock return from -20% to -15%. If there is an upturn, they boost it from +20% to +25%. Either way, long-horizon equity provides effort incentives.